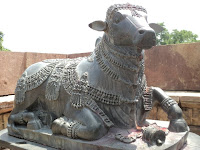 I hope I have made it clear that I always intended to make this blog into an "unvarnished and truthful" look at our time living in India.  I have certainly tried to do that.  While the overwhelming number of experiences have been out-of-this-world POSITIVE - there have been a few that were... well, "not so much".  One was my getting my pockets picked at the Ganesha Immersion near the Hussain Sagar Lake last month (no special blog on that coming - I'd really rather not dwell on it - suffice to say "lesson learned" and I'm down one Blackberry and one digital camera!)

Other things that have happened are not so much "negative" - rather - they are simply a part of a learning-curve for an American guy getting used to the Indian way of doing things.  There are two of these little quirks that I need to remember every day:

1) Indian people simply do not like to tell you "no!"  As a matter of fact, I think it may be an impossibility for them to even say the word!!  This can be a little maddening for somebody who tries to live by the Biblical admonition to "Let your "yes" be "yes", and your "no" be "no"!"  Being so "positive" sounds like a good thing, but - even if a person here means: "No, no, no!  Absolutely NOT!" - it comes out as: "I will try!"  If they meant "I will try!" - that would be one thing.  But, often it really means: "No...not a chance in the world!"

A recent picture of us!

Amy Suzanne and me in Napa